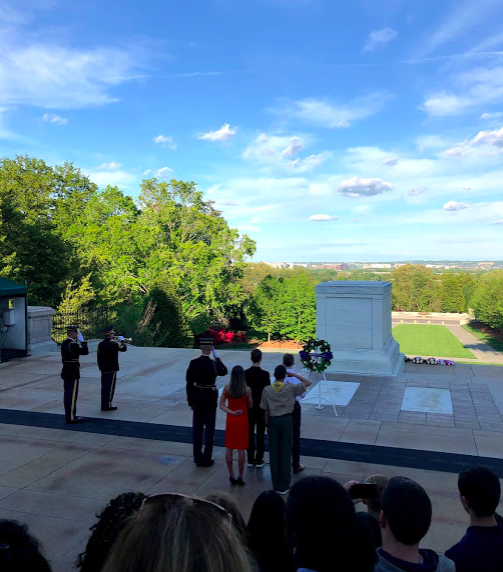 We have the privilege of traveling with your school groups across the country and even the world. We love what we do and can’t wait to travel with you all again.

For now, we reminisce about the good times. As a GO Leader, I have countless memories from the tour season. I recall funny engagements I’ve had with the best bus drivers, the amusing exchanges I’ve seen between the students and their chaperones, delicious meals, fantastic photo opportunities, and memorable behind-the-scenes stories with my co-workers. Allow me to share one of the most unforgettable memories I’ve had on one of my many visits to Washington D.C.

Way back when I was training on one of my very first trips, we were traveling with a middle school from Georgia. One of the students had a connection to a Sergeant based at Fort Myer; the fort right by Arlington National Cemetery!

We entered through a secret entryway very, very few people can enter through. Our motorcoach was searched before we were briefly questioned. Following our entry into the Fort,  we were able to browse through the shopping center on base (How cool?) while we waited for the arrival of the Sergeant. The shopping center had a convenient store, barbershop, bank, etc.

We were introduced to the Sergeant, who was actually one of the few female Sergeants in command in the area. She escorted through the back entryway of Arlington, toward the Tomb of the Unknown Soldier. After the Changing of the Guard, we were escorted to the amphitheater where we met one of the Old Guards who are in current rotation at the Tomb of the Unknown Soldier. The group was able to participate in a brief Q&A session before taking a few photos with him.

Hanging with the Horses

But wait-- there’s more. We were escorted back to our bus and led further into the base. We approach the Fort Myer Caisson Horse Stable. There, we received a private tour of the stables and met the horses who participate in the Caisson Platoon. The Caisson Platoon of the Third Infantry Regiment is a team of black and white horses trained to carry the casket of a military service member during a funeral procession at Arlington Cemetery. Many have never witnessed a formal funeral service at Arlington Cemetery before, so it offered some insight into the preparation that goes into the selection and training of the horses.

The Story of “Black Jack”

While visiting the stables, we learned about the notorious horse, Black Jack. His role was to serve as the Caparisoned Horse. In the funeral process, the caparisoned horse is the lone riderless horse that trails behind the caisson. This horse symbolizes the fallen soldier who will no longer ride in the brigade.

BlackJack was unique to the Caisson Platoon because he was poorly mannered. He refused to walk or be ridden. He seemed to be favored for his beautiful black coat solely. BlackJack would prance and “dance” during his procession, which many feared would be perceived as inappropriate during a solemn military procession. The Platoon assumed he would need to be replaced, especially during Black Jack’s usual outburst during the funeral of former President John F. Kennedy, however, many family members, including Jackie Kennedy, noted that behavior of BlackJack embodied the spirit of the deceased.

To this day, I have not done anything as extravagant as what we did on that trip. I’m sure the students will remember that day for a long time. I am so appreciative of the patience of the group as we coordinated with several outside participants to pull off the visit seamlessly. Our bus driver was just as flexible and cooperative, too. This trip was made possible because of our devotion to customizing class trips! Be sure to connect with a Travel Specialist about personalizing an event just as memorable as this one.

Just a day in the life of our tour season, I guess.