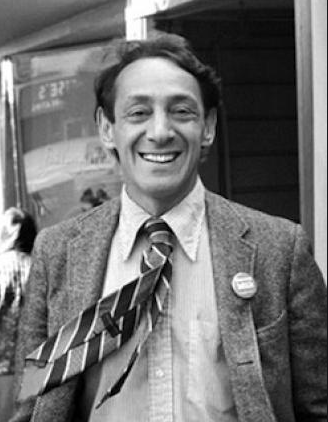 Although our attention has been redirected and fixated towards the Black Lives Movement, we wish to acknowledge that June was Pride Month.  In the spirit of Pride, we wanted to share some light on one of the most influential LGBTQ+ leaders in history.

Harvey Milk was born in May 1930 in New York. After graduating from New York State College for Teachers in 1951, he served in the U.S. Navy, based in San Diego, California. In 1955, Milk quietly left the Navy after being questioned about his sexual orientation. He relocated back to New York. He worked a number of jobs, including a Wall Street investment banker and a production associate on Broadway (The Official Harvey Milk Biography).

After a few years in New York, Milk grew tired of his routine and moved back to the west coast in 1972. This time, he moved to San Francisco. He opened up his own business called Castro Camera. Castro Street was a growing gay community before it was established as part of the Castro Village Association, which welcomed business owners, entrepreneurs, and average employees of all marginalized groups, to gather and unite for change.

Harvey knew he was gay from the time he was a high schooler. He remained reserved about his sexuality because of how it was perceived to the public. The Gay Rights Movement had just begun but remained in its early stages. Only a short while after Castro Camera opened, did Harvey felt more empowered and confident to come out, and participate in the activism (Spoiler-- this was a life-changing power move!).

In 1973, Milk declared his candidacy for a position on the San Francisco Board of Supervisors. He lost, but two years later, he tried again for the same seat. The resilience of this man! At this point in time, Harvey had become a stronger political force with greater political connections including San Francisco mayor George Moscone, Assembly speaker, and future city mayor Willie Brown and future United States Senator Dianne Feinstein (The Official Harvey Milk Biography).

Finally, in 1977, Harvey won a seat on the San Francisco Board of Supervisors.  He was inaugurated on January 9, 1978, becoming the city's first openly gay officer, as well as one of the first openly gay individuals to be elected to office in the United States.

Harvey incessantly advocated against discriminatory bills and policies. He worked closely with mayor Moscone to promote these liberal policies and appoint gays and lesbians to higher-profile positions.  Moscone had become an early supporter of gay rights, but obviously, not all agreed with their agenda, including Supervisor Dan White (The Official Harvey Milk Biography). He is pretty influential in the story of Harvey Milk, trust me.

White was also elected to the San Francisco City-County Board in 1977 but frequently clashed with Harvey over policy reform. He also opposed the growing tolerance of gay rights in San Francisco. A year later, White resigned from his position, claiming his salary wasn’t enough to support his family. He later asked for re-appointment due to the numerous pleas of his conservative, traditional followers. Mayor Moscone ultimately refused, preferring to consider a more liberal, gay-friendly candidate.

A distraught White decided to take matters into his own hands. On November 27, 1978, White carried a .38 revolver into City Hall. He entered the office of mayor Moscone and demanded his re-appointment. When Moscone declined, he was shot numerous times. White then found Milk, and shot him numerous times, as well, before turning himself in to the police shortly after.

White’s trial was known as the “Twinkie defense”, and sparked outrage. White’s lawyers attempted to suggest that White’s actions were caused by an unhealthy diet consisting of Coke, doughnuts, and Twinkies… Yes, I am very serious. The jury convicted White of voluntary manslaughter, and he was sentenced to just six years in prison. A year after his release, White committed suicide.

The verdict of the trial prompted “The White Night Riots”. Peaceful demonstrators gathered by Castro Camera and the nearby community to mourn and celebrate the life of Milk, but the night turned sour when policemen arrived. Because White was a former police officer, the crowd was extremely suspicious of the police department’s involvement with his reduced sentencing. “Although ordered to simply hold the crowd back, many officers began attacking the protestors with nightsticks. Many had even taped over their badges, so as not to be identified” (Stezano).

The stories recalled of the night are eerily similar to the events from the recent  Black Lives Movement protests. Chaos ensured, including vandalism of buildings and vehicles. The crowds dispersed only after tear gas was used. Hours later, a few officers from the police department carried out their own raid, using homophobic slurs to destroy the Castro Street neighborhood and attack innocent bystanders. It is currently known that none of the officers involved with those raids were ever disciplined (Stezano).

The beauty of a democracy is the freedom to publicly protest against opposing views. Peaceful defiances have helped shape legislation in the United States. Peaceful protests amplify the voices of the people so that Congress and the Executive branch can cater to the masses and reform.

The journey to a more accepting, diverse, and beautiful America can be demoralizing. Change doesn’t occur overnight. It can take years to notice any advancements. There isn’t always a singular defining moment or leader. Even as we can openly and confidently celebrate a Pride Month at all, things aren’t perfect. It will require significant generational adjustments to truly overcome the mistreatment, shaming, and violence against our LGTBQ+ peers. Because of the bravery and dedication of leaders like Harvey Milk, the United States’ views on the LGTBQ+ community have shifted for the better. Love is love.